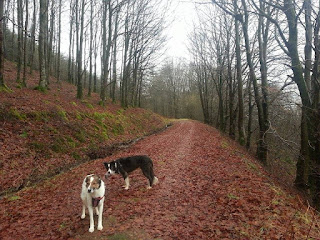 was a rather overcast but dry day in February, about a fortnight ago.  That morning found me and my two dogs walking up the hills and forest near our home in Auldgirth, Dumfries and .

The rugged tracks take you through a mix of spruce, oak, birch, and alder, with intermittent areas opening up to marshy habitats abundant with bracken and heather. In the depths of winter, it can be very silent up in these parts, except for the whoosh of the wind through the trees, which also seems to whistle in your already numb ears.

The path we often take leads us up and up and up, but after a while, the path begins to descend. Suddenly we enter a magical, little hidden treasure trove. The dark spruce trees begin to fade away and instead the path is delineated with beautiful big beech trees. Their far reaching branches create an archway over the path. Still bare from the winter months, I can see the trees all the way down the valley where a large burn flows powerfully, and the beech trees cling on to the steep slope.

The path is carpeted in a burst of copper and rusty red, brightening up a rather grey mood. A little stream, so clear and fresh, hugs the edge of the pathway.

I frequently stop and stand in awe at the surroundings I find myself in. I take a deep breath and listen.

The area is not as silent as you are first lead to believe. I hear the sound of the beech leaves, fallen from the previous autumn, as they flutter across the forest track, kissing the air in their fluttering motion. The caw of a crow echoes hauntingly in the distance, as the wind carries it up the valley.

I hear the creak of trees further away, as they huddle together, bracing themselves in the brisk wind.

The soft padding of my dogs’ paws on the leafy ground makes me smile.

Closer by, the soothing babble of the little stream fills the beech archway as it flows down the hill, venturing towards larger rivers and bigger and brighter horizons.

A gush of song fills the forest, in spates, as various passerine birds flit and fleet from tree to tree.

As the days of February go by, the natural world around us begins to come to life. New growth can be seen, and the deadly silence of dark winter begins to be replaced with the sanguine sounds of the promise of spring.

That simple walk made me dream of the coming of spring and filled me with the hope of new beginnings that were stirring in the wind. Those sounds that broke the winter silence became my muse for this new blog entry.

Since then, I have had my ears to the ground and to the skies, in search of the sounds signalling the coming of spring.

Over the past week, here at Fox Cottage, our early morning stirrings have been accompanied by the drum roll of the greater spotted woodpecker. This dawn hammering in February symbolises the commencement of the territorial displays by these male woodpeckers. Both the lesser and greater spotted woodpeckers are known for their dawn drumming displays in early spring, as the males mark their territories and perform for potential mates. It is a rather charming way to rise in the mornings. The drumming a reminder that spring is nearly fully upon us, and that there are things to be done in preparation for new beginnings.

My recent February country jaunts with the dogs, have allowed me to notice the increase in activity by songbirds. The forests appear to have sprung to life over night, with an explosion of beautiful song soaring through the atmosphere. We have certainly noticed an escalation of song during the dawn chorus in our garden. The blackbird’s song, the most distinctive, becoming more rich and flamboyant as February progresses and their breeding time nears.   Be sure to listen out for their fluid and mesmerising song at the dreamy times during dawn and dusk.

The afternoons are filled with the familiar creaky gate call of the great tit. Chaffinches and robins have been visiting our feeders regularly too, and filling our garden with their beautiful chirping and charming songs.

If we are fortunate enough, the skies above Fox Cottage may be graced by a skein of geese. Frequently, the dawn can be enlivened by their cackling and honking, and the sound of their immense wings as they power themselves through the air.

During this time of year, barnacle geese, pink-footed geese, and greylag geese are taking to the skies at the break of day, leaving their roosting sites at Caerlaverock National Nature Reserve to go in search of foraging sites for the day, before returning at dusk. If you live in the surrounding area, why not set your alarm clocks a little earlier and maybe, just maybe, you will be blessed by these graceful flocks taking to the skies.

Although nature is now rousing from its winter slumber with spring in the air, February can be one of the coldest months of the year. We know it all too well here at Fox Cottage, awakening to snow just this morning. So be sure to continue to top up your bird feeders. Robins in particular struggle in the frozen conditions as digging for worms proves to be a big challenge.


I promise that in return you will be rewarded with the most beautiful sounds that will lift your soul and will help you move forward on to new beginnings and new challenges.

Meanwhile at the Bee Hive Studio...... 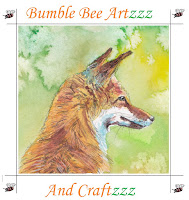 Things have been a little slower here at the Bee Hive Studio, as I am now 37 weeks pregnant! Yes, New Beginnings certainly are coming, I have, however, been extremely busy with cottage work and looking after our animals. But do not fret, I have managed to create some new pieces of artwork. 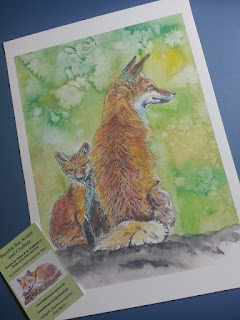 I have also completed this mixed media Brown Hare piece, drawn and painted on my favourite super eco bamboo mixed media paper. This is the first of pieces that I will be making in to a new range of cards. I plan on working on a pine marten over the next few days. For more updates and if you would like to purchase your very own piece of Bumble Bee Artzzz please visit me here. 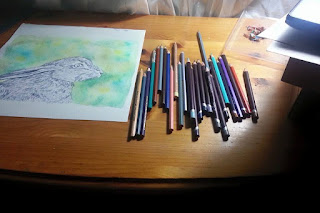 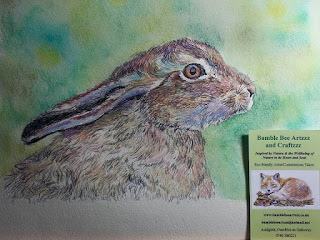 Posted by Beata Kucinski-Thomson at 08:38

Beata Kucinski-Thomson
Hi there, I am a the owner and artist at Bumble Bee Artzzz and Cradtzzz, I have a passion for wildlife, environmentalism, conservation and hold an MSc in Environmental Conservation. I aim to incorporate my art with environmentalism and hope to both educate and inspire others about the natural world. I live in rural Dumfries and Galloway with my husband, border collie, Welsh sheepdog and cat. We are currently working towards self sufficiency and we live very ecologically in our little cottage. I do agility with my sheepdog and we love it!